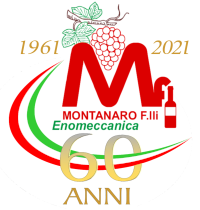 We Work Successfully and with Dedication

with Success and Dedication A strong will and a brave attitude were needed to establish a Company working in the eno-mechanical field in 1959.

During the years following the 2 nd world war, the awakening and development throughout Italy were not growing in the wine-making industry, where the old-style techniques were still used.

A tough, hard – but fascinating deal, was the commitment of Angelo Montanaro, the company founder: with the learning received from attending the technical-based school Istituto Professionale Statale “Castigliano” in Asti, he decided , together with his two brothers, to start his own small business in Canelli , the area where some innovating ideas were digging their roots.

As always, the beginning was not easy: short credit to start the manufacturing activity, the need of growing a reputation of professional value and quality.

After overcoming troubles, problems and hard working, the company MONTANARO FRATELLI succeeded in establishing a solid presence in this field, as Angelo Montanaro believed from the beginning.

Years after, the two younger brothers left the company, and Angelo Montanaro was supported by his three sons : from this moment the Company was combining the experience of the father with the excitement of the young sons, mixing the history, the roots with the new commitments and hopes.

Angelo Montanaro was fully successful in transmitting his experience to the sons, as now that they are leading the Company by themselves, the results are extremely positive.

The field and core business are the same as always : the manufacturing, commissioning, adjusting and reconditioning of enological equipment, with careful after-sale assistance. Talking about the second-hand equipment,the Company is seriously involved in the selection, overhauling and reselling of ‘guaranteed’ items for all the wine-industry cycle, from the wine-making to the bottling process. Last but not least, “Fratelli Montanaro” is having in these years a considerable success in the manufacturing of plates filters, using both cellulose filter sheets or fossil flours.

As for the coming years, the Company is growing not only in its size, but in the quality of the equipment, in the professional attitude, in the innovation research for the wine-making world.

This has always been the Company philosophy, the continuous effort towards the success and the self-realisation begun more than 50 years ago, allowing Angelo Montanaro and his brothers to owe and build their own future.